What is Tang Soo Do?

The very first evidence of this ancient form of Korean martial arts appeared during the Three Kingdom era (57 BC-935 AD) as Hwa Rang Do. Since then, 2,000 years have passed. The indigenous martial arts quietly developed through generations of the Korean people. During some eras it flourished and other times it diminished, according to the political, economic or cultural environment. The art was known by various names throughout the eras as Hwa Rang Do, Moo Sul, Kyuck Too Ki, Soo Bahk Ki, Soo Byuck Ki, Taek Kyun etc. respectively.

Following 1945 Korean independence, the Korean martial arts were again merged and flourished throughout the entire Korean Peninsula. Many organizations were founded with various names such as Soo Bahk Do, Tang Soo Do, Tae Soo Do and so on.

The Purpose of Tang Soo Do Training

In today’s hectic society, there is no doubt that we need self-defense skills. Equally important are physical fitness and methods for the release of daily stress – No matter whether you are seeking self-defense, better health, physical fitness or discipline, our Tang Soo Do can meet your needs. However, Tang Soo Do has its own unique character which differentiates it from any other form of martial arts or martial sports.

The real value of Tang Soo Do is not the belt you earn, but the changes that occur within you, in your quest for them. These changes include the betterment of your mind, body and spirit and the development of individual character and respect for others. The true goal of Tang Soo Do training is to use the lessons you learn in the studio to enrich every part of your life.

When we reach the ultimate level of "DO", we can live in perfect harmony with the laws of nature.

Tang Soo Do not only teaches physical techniques, but also trains us to practice “DO” way of life through practice of the five virtues:

Grandmaster Jae C. Shin is the founder of the World Tang Soo Do Association, and is one of the leading figures of martial arts in the world today.

He was born in Korea in 1936, and began his long and distinguished career in martial arts at the age of twelve. During his childhood, an unknown monk initially inspired in him a strong desire to learn martial arts. Later, he joined Seoul Moo Duk Kwan central gym and began serious study under Grandmaster Hwang Kee, a founder of the Korean Moo Duk Kwan system.

By the time he was 1st Dan, he had already started his teaching career as an assistant instructor at the central gym. After that, he taught at Korean University, Seoul Central YMCA, various colleges, and many police and military institutions. His many years of teaching experience and his extreme dedication have added to his scientific and unique methods of teaching Tang Soo Do. His six fields of expertise include self-defense, forms, breaking, weapons, health care, and meditation. He has evolved these separate arts into one of the finest and most effective martial arts; The World Tang Soo Do system.

When he was recruited to the Korean Air Force in 1958, he had his first experience teaching American soldiers. After receiving his Master’s degree in Political Science at Korea University, he came to the United States in order to extend his instruction of foreign students in 1968.

The year he came to the United States of America, Black Belt Magazine honored him for all time by devoting a full chapter to him in the book, “20th Century Warriors,” putting him in the company of the most legendary martial arts figures ever. Grandmaster Shin, one of the most respected and well known masters in this century, is one of the few masters who has devoted his entire life to the traditional martial arts. In addition to insisting on disciplined, rigorous training and exacting techniques, he has always preached that the true value of martial arts training is in the application to everyday life. Teaching children is one of his favorite pastimes and he has become an expert in child development. His advice to his Black Belt instructors is good advice for teachers of all kinds, “When examining your abilities as an instructor, examine your young student’s manners, attitudes, school reports and health conditions. Their improvements should mirror your own.”

He raised three Mottoes for his leadership of nearly 8,000 black belt members: Traditionalism, Professionalism and Brotherhood and he brings these qualities with him wherever he travels and teaches. Grandmaster Shin is respected as a true leader, teacher and master of masters. 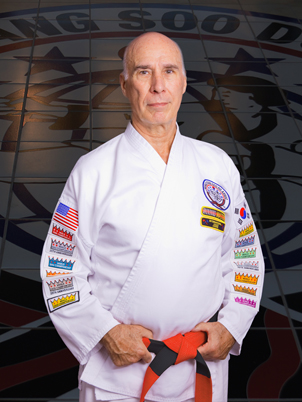 Grandmaster Robert Beaudoin is a charter Master of the World Tang Soo Do Association and is the father of traditional Tang Soo Do in New England.

He was born in Cincinnati, Ohio in 1942 and grew up in Connecticut. After joining the Air Force and being selected for a special language program at Yale University, he was stationed at Osan Air Base in Korea and got his first taste of the martial arts. In 1962 he began training in Tang Soo Do under Grandmaster Jae C. Shin. This date marks the beginning of a student/teacher/friend relationship the two would share for more than 50 years. On May 12, 1963, Grandmaster Beaudoin tested for his black belt in Inchon, Korea in front of Grandmaster Hwang Kee and Grandmaster Shin.

After returning to the United States, he set up his first school in Roswell New Mexico while finishing his time in the Air Force at Walker Air Force Base. The school proved so successful that it expanded beyond just the service men and included wives and children. Upon completing his military service, he returned to Connecticut and opened the Academy of Karate in 1965. Meanwhile, he married JoAnn Conway, with whom he raised Jennifer and Eric, earned a Bachelor of Science Degree from University of Connecticut, a Masters degree from Trinity College, and completed his Doctorate in Education from Argosy University in Sarasota, Florida.

Grandmaster Beaudoin combined his martial arts teaching experience and his Doctorate in Education by starting the Quality Training and Consulting business, conducting leadership training programs for private and public organizations. He has served as a college professor at the University of Connecticut, an adjunct professor for Post University, Illinois State University, and the University of New Haven. His combination of leadership and teaching skills has helped him develop the ability to teach students from Tiny Tigers to seniors.

Grandmaster Beaudoin was promoted to the rank of 8th Dan at the 2010 World Championships at the same event where Grandmaster Shin was promoted to 9th Dan. Throughout his martial arts career loyalty has been one of the central tenets of his training and one of the primary attributes he has passed onto his students. As he begins his tenure as Grandmaster of the World Tang Soo Do Association, he has asked for unity and loyalty among all Masters, instructors and students in order to continue the vision of our founder, Grandmaster Shin. 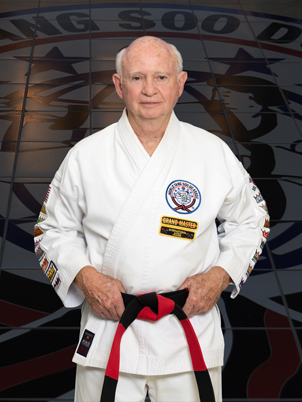 Grandmaster Strong began his martial arts training in Tae Kwon Do through the Jhoon Rhee Institute in Austin, Texas when he was an undergraduate student at the University of Texas. He received his 1st Dan from the Alabama Karate Institute in 1974 and his 2nd Dan from the Kuk Ki Won in 1977, both in Tae Kwon Do. He achieved his 3rd and 4th Dan from the Korean Tang Soo Do Association, Moo Duk Kwan, Hwang Kee, President in 1981 and 1983 respectively. In 1986, he joined the World Tang Soo Do Association and achieved 5th through 7th Dan promotions from Grandmaster Jae C. Shin and 8th Dan from Grandmaster Robert Beaudoin in 2014.

On April 1, 2017 at the 28th Annual Masters’ Clinic, the Board of Directors voted to approve Grandmaster William Strong as the President of the World Tang Soo Do Association. He began the presidency on May 15, 2017. In this position, he is responsible for numerous administrative duties for the Association and the WTSDA Foundation including general headquarters office policy, studio/club approval, coordination of travel for the two Grandmasters, Dan promotions, financial reporting, legal issues, Board meetings, and World Championships. He is also responsible for diplomatic issues, organizing publications, and sanctioning WTSDA events. Grandmaster Strong served as the chair of the Membership committee 1987-1990, Technical Advisory Coordinator 1990-1995, chair of the Technical Advisory committee 1995-2014, and Director of Masters’ Clinics 1991-2014. He is also Secretary General of the WTSDA and member of the Board of Directors, Executive Committee, Governance Committee, and Publications Committee. He was promoted to 8th Dan Grandmaster at the 2014 World Championships. Grandmaster Strong received his Ph.D. in Geography from the University of Texas at Austin. He served as professor and chair of the Department of Geography at the University of North Alabama for 42 years, interim vice-president for Academic Affairs for one year, and worked at the National Geographic Society as Geographer-in-Residence for two years. He retired from the University of North Alabama in 2012. Since then he has worked closely with Grandmaster Robert Beaudoin to give greater support to the promotion and enhancement of the World Tang Soo Do Association and its membership.

Your cart is empty.

You can find out more about which cookies we are using or switch them off in settings.

This website uses cookies so that we can provide you with the best user experience possible. Cookie information is stored in your browser and performs functions such as recognising you when you return to our website and helping our team to understand which sections of the website you find most interesting and useful.

Strictly Necessary Cookie should be enabled at all times so that we can save your preferences for cookie settings.

If you disable this cookie, we will not be able to save your preferences. This means that every time you visit this website you will need to enable or disable cookies again.